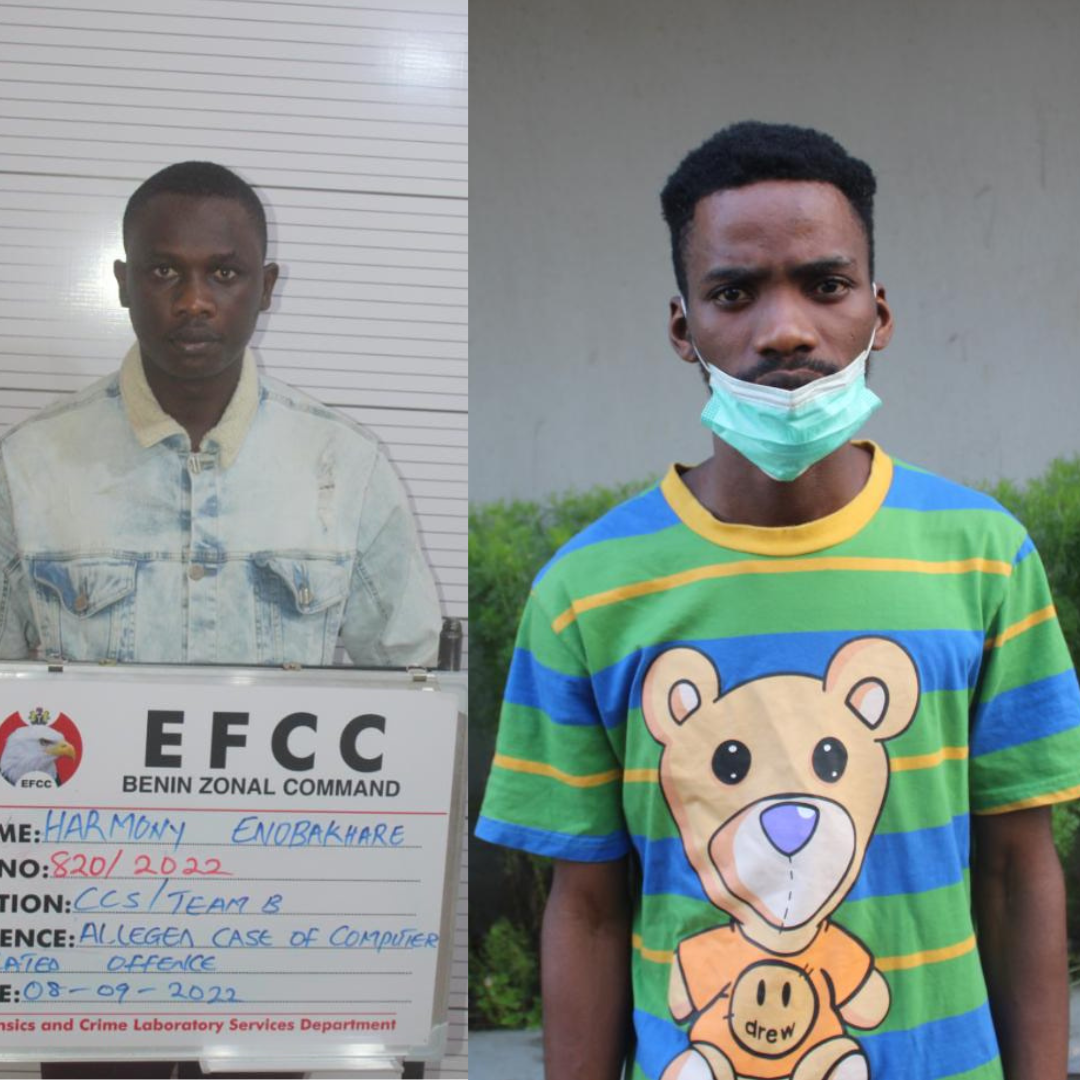 The Benin Zonal Command of the Economic and Financial Crimes Commission, EFCC, has secured the conviction and sentencing of two Internet fraudsters.

Enobakhare was jailed on Wednesday, September 28, 2022, after pleading guilty to one count charge bordering on retention of N518,114,049.35k (Five Hundred and Eighteen Million One Hundred and Fourteen Thousand, Forty Nine Naira and Thirty – Five Kobo) which are proceeds of illegal conducts.

The charge against him reads : that you Harmony Enonakhare sometimes between 1st August and September 2022 in Edakpa community, Benin City, Edo State within the jurisdiction of this honourable court did retain the aggregate sum of Five Hundred and Eighteen Million, One Hundred and Fourteen Thousand, Forty – Nine Naira and Thirty – Five Kobo (N518,114,049.35) only in your Access Bank account number 009778229 knowing that same represent proceeds of your criminal conduct to wit: Cybercrime and thereby committed an offence contrary to Section 17(a) of the Economic and Financial Crimes Commission (Establishment) Act 2004 and punishable under Section 17(b) of same Act.

The defendant pleaded guilty to the charge, prompting prosecution counsel, Ibrahim Mohammed to pray the court to convict and sentence him accordingly. However, counsel to the defendant , Pascal Ugbome prayed the court to temper justice with mercy and consider the remorse of the defendant.

The judge added that the balances in his Access bank account, Polaris bank, GTB, UBA and Muual Benefit Micro Finance Bank, with proceeds of crime recovered in the course of investigation, be forfeited to the Federal Government of Nigeria through the EFCC and the accounts permanently closed.

Osamudiamen, on the other hand, was jailed on Tuesday, September 27, 2022, after pleading guilty to one- count charge of impersonating foreign nationals with intent to gain advantage for himself.

willistonrobert084@gmail.com to obtain money from one Mikki and sending fictitious document to our advantage, the pretence you knew to be false and thereby committed an offence contrary to Section 22(2)(b)(I)(ii) of the Cybercrime (Prohibition Prevention etc) Act 2015 and punishable under Section 22(2)(b)(IV) of same Act.

He pleaded guilty to the one-count charge when it was read to him. In view of his plea, prosecution counsel, F. Dibang prayed the court to convict and sentence him accordingly.

Justice Abang convicted and sentenced Osamudiamen to five years imprisonment, with an option of N500,000 (Five Hundred Thousand Naira)as fine. He also forfeited his phone to the government.

The two convicts began their journey to the Correctional Centre, when they were arrested by operatives of the Benin Zonal Command of the EFCC, for internet- related offences.

Specifically, they were convicted for retaining fraudulent funds in their bank accounts and impersonation of foreigners to defraud their victims.