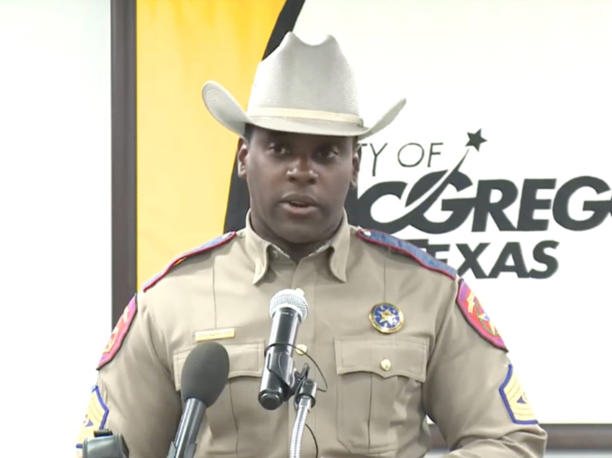 Five people are “confirmed dead” after a mass shooting in a small town in Texas, according to officials.

Police have a suspect in custody for the killings in McGregor, Texas, Department of Public Safety sergeant Ryan Howard told reporters.

“The main thing was an officer-involved shooting as well as another incident that took place,” he said. “Because that incident is still under investigation, I can’t give full details about the incident that transpired.”

Officials have not yet released the identity of the victims or the alleged shooter.

A GoFundMe page identifies two of the victims as mother and daughter Natalie and Lori Aviles.

“Our sweet Natalie and Lori, you’ll forvever be in our hearts!” Cousin Laila Hidrogo, the organizer of the page, wrote on Facebook. “None of this feels real, but we know you’re rejoicing with our Father in Heaven…Please continue to keep Ezra and Zion, Lori’s Son, our family in your prayers.”

The gunman shot his wife and her two children before being shot by police, according to an anonymous law enforcement official who spoke with KWTX.

Two other deceased women — one found in the street and another in a nearby home — were discovered at the scene, the official said.

A bystander told KXXV that police were spotted going “in and out” of a home crime scene in McGregor.

“This terrible and senseless act of violence has devastated our town,” McGregor mayor Jimmy Hering said in a statement. “While the families are being notified of the details, we ask that you keep them, the officers and the community of McGregor in your thoughts and prayers. We will keep the public informed as investigative facts are confirmed.”

Schools officials with the McGregor Independent School District said the shooting occurred during a “domestic disturbance.

‘There was a domestic disturbance that resulted in a shooting in McGregor this morning. As a result of that shooting, MISD ‘locked down’ for about 15 minutes. Once we received an all clear from MPD, the lockdown was lifted,’ McGregor ISD superintendent James Lenamon said in a statement.

The Texas DPS confirmed to Fox 44 it was on hand to investigate the officer-involved shooting portion of the crime.

The Independent has contacted DPS and McGregor police for further comment.