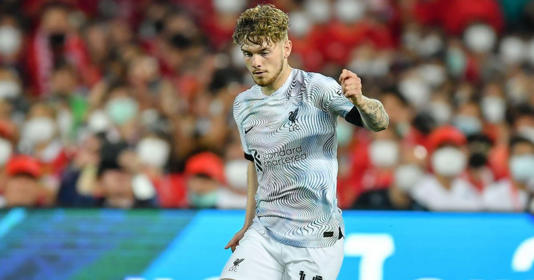 Liverpool starlet Harvey Elliott is keen to prove that he “should be starting” for the club under Jurgen Klopp next term after what has been an “intense” pre-season.

The 19-year-old was one of the standout players in the Championship during the 2020/21 campaign while on loan at Blackburn Rovers.

The midfielder returned to Liverpool last summer and he was in the team at the start of the season.

Elliott made a bright start, though his season was hampered by an ankle injury picked up in a challenge with Leeds United defender Pascal Struijk.

The Englishman returned to full fitness before the end of the season, but he was only able to feature eleven times overall across all competitions.

Liverpool had been beaten twice during pre-season. Man Utd hammered them 4-0 earlier this month in a friendly that does not really mean anything.

Then on Wednesday, they were beaten 1-0 by Red Bull Salzburg. Liverpool face Pep Guardiola’s Manchester City at Wembley this weekend as they battle it out for the Community Sheild.

Elliott has started three of Liverpool’s four friendlies so far and he is keen to prove to Klopp that he needs to start next season.

He has also acknowledged that this “intense” pre-season has been necessary for him to prepare sufficiently before another hectic campaign:

“There is a lot of learning this season and there will be more and more as the season goes on. I’m looking forward to the season. Hopefully I can go out and prove again why I could be, and should be, starting in this team.

“If you look at the team, we just keep on bringing in more and more unbelievable talent, so it’s going to be hard but I’m here if I’m needed and I’m always willing to give 100 per cent to myself, the team, the badge and the fans.”