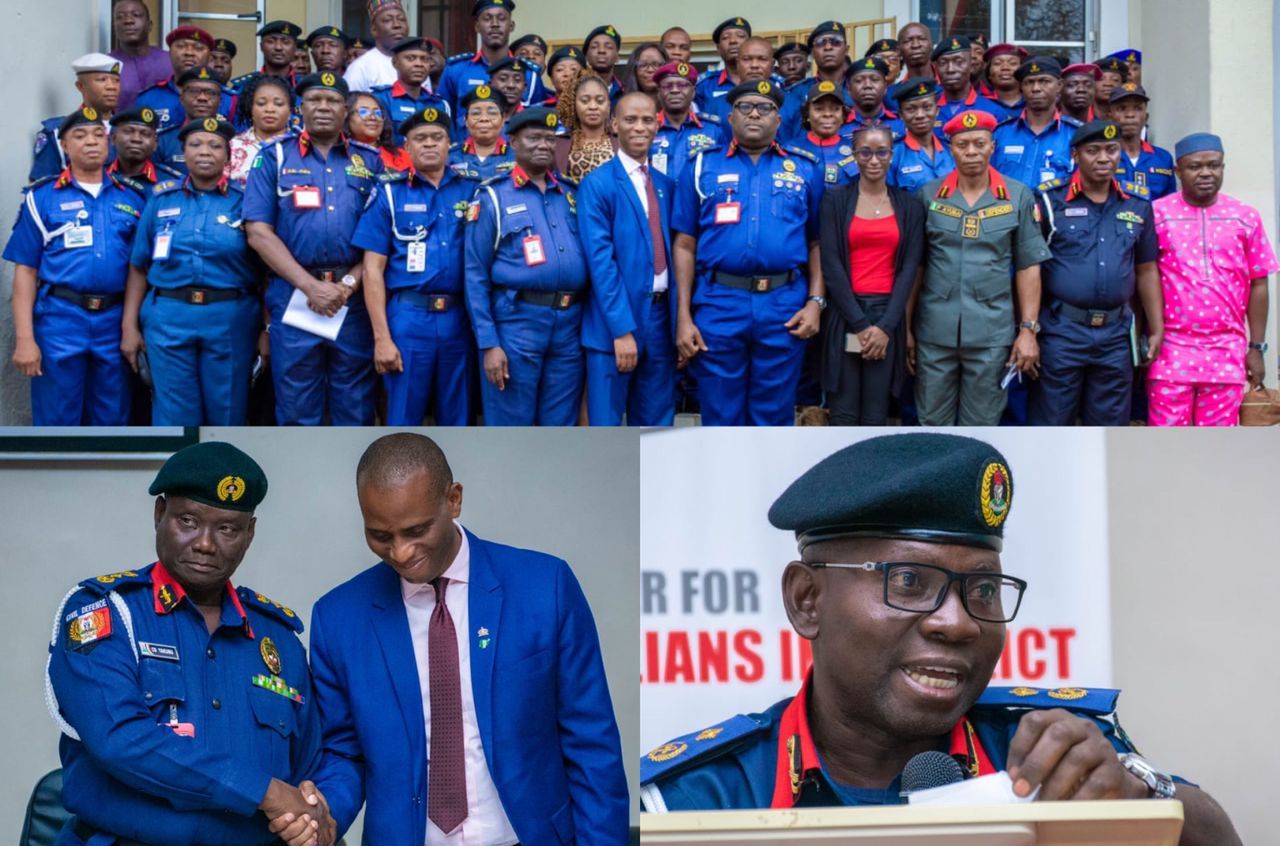 In a bid to further boost the capacity of NSCDC personnel in peace and conflict resolution, over 100 staff drawn from the National Headquarters of the Corps and Federal Capital Territory Command have been trained on the agency’s response towards civilians in times of emergency.

The training workshop was organised by the Centre for Civilians in Conflict (CIVIC) in collaboration with NSCDC at the NSCDC Headquarters in Abuja.

The Commandant General, Dr. Ahmed Abubakar Audi, mni, who was represented by the Deputy Commandant General, Crisis Management Directorate, Dr. Nnamdi Nwinyi, said that the workshop was apt, in view of the new trends of security challenges in Nigeria.

He added that the situation had necessitated the need to find new ways of mitigating civilian harm in conflict situations.

“With the new trend of insecurity in the country today, there is a need for more caution on the part of the civilians and that is why we are having this training today.

“The training is meant to build the capacity of officers to improve on their interaction with the populace.

“This has to do with giving civilians more information or educating them on what to do in crisis situation,” he said.

Dr. Nwinyi assured that similar training would be held for NSCDC personnel nationwide in view of its importance.

“Crisis management is under the mandate of the corps and part of it is the protection of the civilian populace during the period of emergency.

“The Peace and Conflict Unit of the corps is the one in charge of that and we have been reaching out to the populace, particularly communities.

“They educate civilians on the need to know issues that occur in their environment and what to do in conflict situations,” he said.

Dr. Benson Olugbuo, Country Director, Centre for Civilians in Conflict, said that the workshop was on protection and mitigation of harm to civilians during conflicts.

“In Nigeria today, we have different conflicts we call asymmetrical warfare, in rhetoric sense, the enemy could be anybody.

“The unfortunate thing is that citizens sometimes are caught in the crossfire.

“So, we believe that there is need for training and retraining of security agencies, so that they know how to ensure reduction in civilian casualty in internal security situations.

“We know that the NSCDC is involved in some of the security operations in Abuja, Maiduguri and other parts of the country and that is why we decided to hold the training in Abuja,” he added.

Olugbuo further said that the training was to ensure that officers were trained to reduce civilian harm during internal security operation.

One of such strategies, Olugbuo said, was used in Borno to cater for civilians.

“We established what we call Civilian Protection Committees and these committees work in collaboration with security agencies.

“In some of the areas where conflicts already exist, civilians have the opportunity to directly collaborate with security agencies and inform them about the security situation they found themselves and then discuss on how they can protect themselves.”

The country director said even though security agencies take a lot of responsibilities during conflicts, they should also “take a second look and ensure that civilians are not caught in the conflicts.”

Olugbuo said it was difficult to track the application of sanctions on perpetrators of the conflicts, even though most of the agencies provide for such sanctions.

He, therefore, said that it was better to protect the civilians than wait for the application of sanctions.