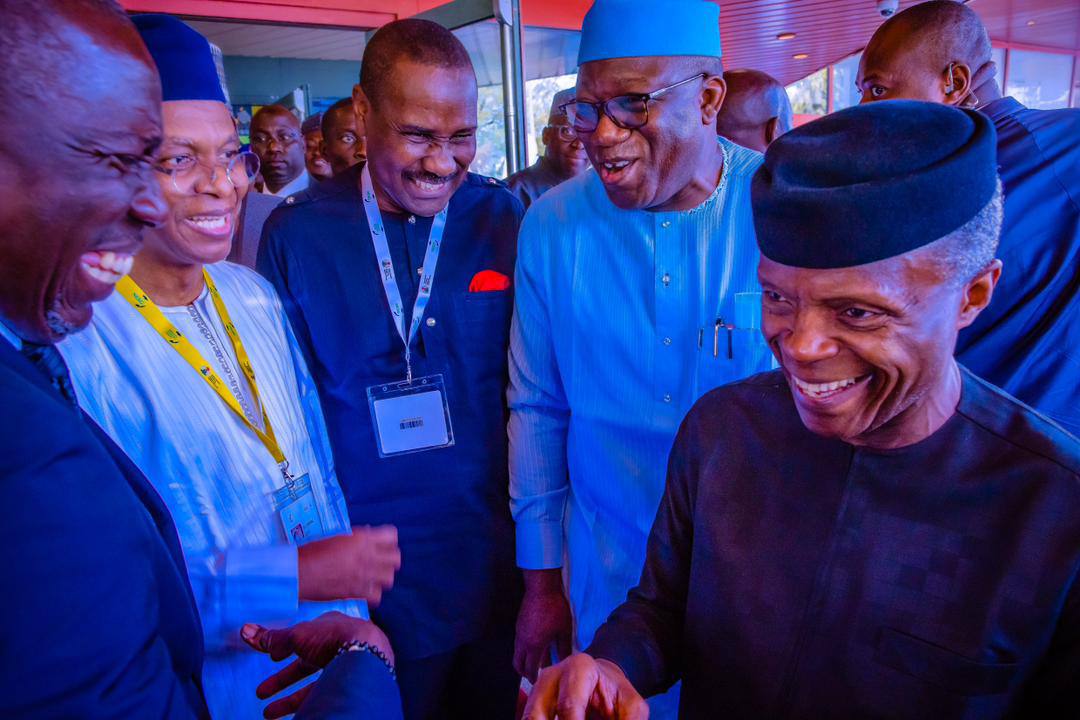 With pressing national, global economic challenges, as well as emerging local and global trends, the task ahead of the Nigerian nation requires partnership, innovative thinking, and most importantly, disciplined implementation, by both government and the private sector.

This was the summation of the remarks by Vice President Yemi Osinbajo, SAN, who represented the President at the opening event of this year’s National Economic Summit.

Speaking on the theme of the Summit, “2023 & Beyond: Priorities for Shared Prosperity,” The Presidential address focused on key issues to drive growth and prosperity, including the National Development Plan 2021 – 2025, and the impact of the Economic Sustainability Plan, among others.

The Vice President further highlighted the need for increased productivity and value addition across different sectors of the economy so as to create more jobs for Nigerians, especially its youths, and increase national revenue for further development.

The President’s address highlighted key issues such as youth development, improving macroeconomic conditions, the impact of climate change, the need for a just transition to net-zero emissions, debt-for-climate swap deal for African countries, and the launch of the African Carbon Market Initiative at the ongoing COP-27 in Egypt.

It also focused on leveraging disruptive technologies through digitization for further economic developments, as well as the need to improve social welfare programmes, and focused investment in the country’s youth.

According to the VP, there is “The need for more intentional and focused investment on our youths, especially in globally marketable skills, access to credit, protection of intellectual property rights of innovators, and inventors and access to global markets. I trust that some of these issues will be given deeper attention in your discussions at this summit.

“The task ahead requires partnership, innovative thinking; but, most importantly, disciplined implementation,” he said

Emphasizing on improving macroeconomic conditions, the Vice President said, “On the positive side, the economy continues to grow with GDP growth at 3.54% in the 2nd quarter of this year. Non-oil revenues have similarly continued to improve due in part to strategic revenue initiatives, including the annual Finance Act.”

“But it is still our revenue challenges that heighten the notion that we have a debt problem, which is really not the case, given that our debt/GDP ratio is just 23%.”

Noting that although the country’s current debt service to revenue ratio is high, Prof. Osinbajo stated that “Unlike in the past, when we were not keeping a close eye on debt matters, the creation of the Debt Management Office means that we are better able to adopt strategies to manage our debt, including using more concessional loans, spreading out our debt maturities and re-financing short-term debt with longer-term debt instruments.

This is why increasing revenues should engage most of the attention, he stated.

“We have already seen real improvements in our non-oil revenues, but our focus must now be on productivity or encouraging value addition.  Productivity and value addition means creation of traceable value; it means jobs, opportunities, and more tax revenues.”

He continued that, “To increase productivity, we must free up our environment for business, make local and international trade easier by fixing the ports, effecting the National Single Window, revamping our Customs processes and Tariff codes to reduce delays and arbitrariness, removing needless restrictions on imports to enable value added processes.”

Similarly, Prof. Osinbajo emphasized that Nigeria must also press its advantage in renewable energy, noting that “the future are the jobs and opportunities from the green economy.”

The VP noted that the “Solar Power Naija programme launched under the Economic Sustainability Plan which is designed to achieve 5 million solar connections impacting over 25 million Nigerians will contribute in this regard. But the impact includes opportunities in manufacturing and maintaining solar equipment and facilities.”

He also highlighted local security and economic challenges, global turbulence on the political, economic and social fronts, including the Russia-Ukraine war and global tensions, which he noted “is impacting Africa, including through higher food prices and disruptions to democratic governance.”

With global economy still recovering from the effects of COVID-19, as well as the challenges posed by climate change, which has caused flooding in several states in Nigeria, the Vice President observed that “it is clear that our work is cut out and we have to choose our priorities going forward very carefully. There are whole gamut of things that require our attention and many are well captured in the National Development Plan 2021 to 2025.”

On the volatility of the country’s exchange rate, Prof. Osinbajo was of the view that “The discussion that we must have, shorn of sentiments, is how best to manage the situation by finding a mechanism for increasing supply and moderating demand, which will be transparent and will boost confidence.”

The VP also emphasized the need for urgent action to reduce inflation, noting that inflation is both a tax on the poor and disrupts long term growth.

In addition to the monetary measures being taken by the Central Bank of Nigeria, Prof. Osinbajo stated that “we would need to increase domestic production of food and ensure that it gets to the market.”

“In this regard, we must pay closer attention to the institutional insight of the Agriculture for Food and Jobs Programme of the Economic Sustainability Plan (ESP), which sought to support small scale farmers by guaranteeing uptake of their production through enabling bigger farmers, suppliers to manufacturing companies and commodity exchanges to support them across every stage of production,” he said. Addressing the impact of climate change on local economies, the Vice President reiterated Nigeria’s position on the call for just transition and the debt-for-climate swap deals, noting that “these swaps can be a win-win for debtors and creditors.”

According to him, “We must continue to call for a just transition that enables us to use our abundant gas resources to meet our energy needs, including for electricity and cooking. This will enable us to secure the resources needed for investment in natural gas, as well as in renewable forms of energy. I am happy that this matter is on the table at the ongoing COP-27. It should be pursued to its logical conclusion of securing additional finance for developing economies.”

Also highlighting the significance of the Africa Carbon Markets Initiative, which was launched last week at COP 27 in Egypt, the VP observed that unlocking the potential of carbon markets in Africa would help raise essential resources to tackle climate change on the continent.

“Since the $100 billion in financing, which the developed countries promised to help to tackle climate change remains to be fulfilled, we should explore the potential of carbon credits to raise the required resources,” he stated.

Continuing, he said, “It has been estimated that Nigeria could produce more than 30m tonnes of carbon credits annually by 2030, bringing in more than $500m annually. The future are the jobs and opportunities from the green economy. We must press our advantage in renewable energy.”

“We have already seen the impact of digitisation in fintech in Nigeria, and the story of how our young people managed to create six unicorns in a period of two recessions is one that will continue to be told.  We must build on these achievements, which also offer us the opportunity to leapfrog by deploying digital technologies in agriculture, health, education, logistics, and even manufacturing, housing and smart power grids,” he added.

Prof. Osinbajo further noted that under the Buhari administration, the Federal Government introduced the most comprehensive and resourced Social Investment Programme, which helped Government adopt “A more bottom-up approach to economic planning and budgeting.”

“It also helped us to implement a wealth and opportunity creating social investments, as opposed to mere poverty alleviation. We are far from our set objectives, but we have begun and must press forward.”

Commending the organisers, the Vice President observed that the Summit “Has become the forum for high quality engagements amongst thought leaders, captains of industry, civil society and decision makers in the highest echelons of government on the economy of this country.”