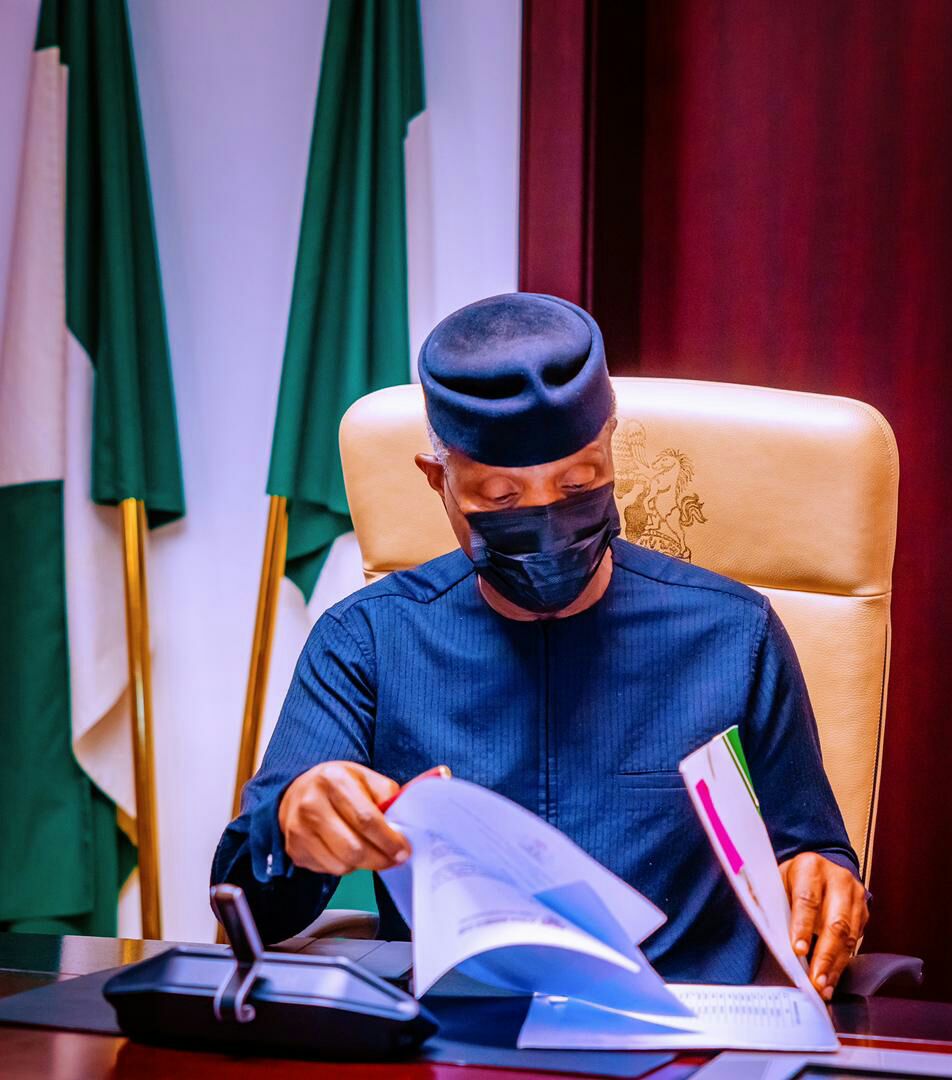 *VP says “it is time for decisive action, we cannot afford to delay”

Africa’s increasing energy gaps require collaboration to take ownership of the continent’s transition pathways and the action should be decisive and urgent, according to Vice President Yemi Osinbajo, SAN.

Prof. Osinbajo stated this in his remarks delivered at the global virtual launch of Nigeria’s Energy Transition Plan, a roadmap to tackle the dual crises of energy poverty and climate change.

Speaking on the need to have a peculiar transition plan, the Vice President said “for Africa, the problem of energy poverty is as important as our climate ambitions. Energy use is crucial for almost every conceivable aspect of development. Wealth, health, nutrition, water, infrastructure, education, and life expectancy are significantly related to the consumption of energy per capita.”

The VP highlighted the significant scale of resources required to attain both development and climate ambitions. Nigeria would need to spend $410 billion above business-as-usual spending to deliver our Transition Plan by 2060, which translates to about $10 billion per year.

“The average $3billion per year investments in renewable energy recorded for the whole of Africa between 2000 and 2020 will certainly not suffice,” he added.

Additionally, the Vice President noted that “we have an inter-ministerial Energy Transition Implementation Working Group, which I chair. We are currently engaging with partners to secure an initial $10 billion support package ahead of COP27 along the lines of the South African Just Energy Transition Partnership announced at COP26 in Glasgow.”

At the virtual event, Mr. Shubham Chaudhuri, Nigeria Country Director for World Bank said the bank plans “to commit over USD 1.5 billion towards the Energy Transition Plan on renewable energy, on power sector reforms, on clean cooking, and wherever opportunities arise.”  In a similar vein, Mr. Adam Cortese, CEO, Sun Africa stated that “the launch of Nigeria’s Energy Transition Plan has further accelerated our efforts, proving Nigeria to be fertile grounds for investments in the sector. We are in the final stages of discussion with US EXIM Bank on a USD 1.5 billion financing package.”

Speaking on the effects of Climate Change in Africa, Prof Osinbajo explained that “climate change threatens crop productivity in regions that are already food insecure, and since agriculture provides the largest number of jobs, reduced crop productivity will worsen unemployment.

“It is certainly time for decisive action, and we just cannot afford to delay. African nations are rising to the challenge. All African countries have signed the Paris Agreement and some countries, South Africa, Sudan, Angola, and Nigeria have also announced net-zero targets.”

Giving more details on energy poverty in Africa, the VP noted that “the current lack of power hurts livelihoods and destroys the dreams of hundreds of millions of young people.

“And although Africa’s current unmet energy needs are huge, future demand will be even greater due to expanding populations, urbanization, and movement into the middle class.

“It is clear that the continent must address its energy constraints and would require external support and policy flexibility to deliver this. Unfortunately, in the wider responses to the climate crisis, we are not seeing careful consideration and acknowledgement of Africa’s aspirations.”

Underscoring the importance of collaboration, the Vice President then noted that “we developed our Energy Transition Plan to engage with the rest of the world in a serious, thorough and data-backed manner.”

Prof. Osinbajo explained that “There is a clear need for African nations to engage more critically and vocally in conversations on our global climate future.

“More importantly, we need to take ownership of our transition pathways and design climate-sensitive strategies that address our growth objectives. This is what Nigeria has done with our Energy Transition Plan.”

Making reference to the Nigeria Energy Transition Plan, the Vice President said “the plan was designed to tackle climate change and deliver SDG7 by 2030 and net-zero by 2060, while centering the provision of energy for development, industrialization and economic growth.”

According to him, “we anchored the plan on key objectives including lifting 100 million people out of poverty in a decade, driving economic growth, bringing modern energy services to the full population and managing the expected long-term job losses in the oil sector due to global decarbonization.

“Given those objectives, the plan recognizes the role natural gas must play in the short term to facilitate the establishment of baseload energy capacity and address the nation’s clean cooking deficit in the form of LPG.

On other aspirations of the roadmap, Prof. Osinbajo explained that “the plan has the potential to create about 340,000 jobs by 2030, and 840,000 by 2060. It also presents a unique opportunity to deliver a true low-carbon and rapid development model in Africa’s largest economy.”

“We are currently implementing power sector initiatives and reforms focused on expanding our grid, increasing generation capacity, and deploying renewable energy to rural and underserved populations.”

Aside from the transition plan, the Vice President announced the launch of the Universal Energy Facility “an innovative, results-based, finance programme that focuses specifically on scaling up electricity access for productive uses.”

He explained that “the Universal Energy Facility will provide grant payments to enable solar companies to expand their operations to small and medium-sized enterprises across Nigeria, while crowding-in additional private capital.”

“Projects supported by the Universal Energy Facility will help grow businesses and create jobs, making them key contributors to our Energy Transition Plan.

“I’d like to encourage solar companies in attendance today to engage with this innovative financing opportunity, which is being managed by Sustainable Energy for All,” he added.

Speakers at the event commended Nigeria’s leadership and pioneering role in the region, emphasizing the need for data-driven country-level energy transition plans that recognise the unique pathways each country would need to take in order to achieve a just, inclusive and equitable energy transition for all.

Other speakers included the Minister of Petroleum and Energies from Senegal, Dr. Aissatou Sophie Gladima; Minister of Electricity and Renewable Energy from Egypt, Prof. Dr. Mohamed Shaker El-Markabi as well as representatives of the United Nations, Sustainable Energy for All, The World Bank, African Development Bank, IRENA, The Rockefeller Foundation and the Global Energy Alliance for People and Planet.